What is POE power supply?

POE (Power Over Ethernet) refers to some IP-based terminals (such as IP phones, WLAN access points AP, network cameras) without any changes to the existing Ethernet Cat.5 cabling infrastructure. While transmitting data signals, it can also provide DC power for such devices by the POE adapter. POE is also known as POL (Power over LAN) or Active Ethernet, and is sometimes referred to as Power over Ethernet. This is the simultaneous transmission of data using existing standard Ethernet transmission cables. The latest standard specification for electrical power and maintains compatibility with existing Ethernet systems and users.

POE technology can ensure the normal operation of existing networks while minimizing costs while ensuring the security of existing structured cabling. The IEEE 802.3af standard is a new standard based on the Power over Ethernet (POE) system. It adds the standard for direct power supply through the network cable based on IEEE 802.3. It is an extension of the existing Ethernet standard and the first international standard for power distribution standard. 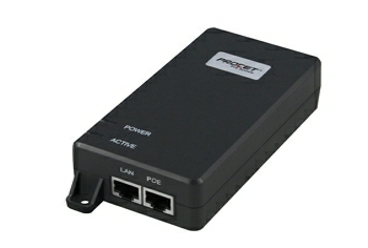 PoE early applications have no standard and use idle power.

1. IEEE 802.3afIEEE 802.3af (15.4W) became the first PoE power supply standard, which specifies the Ethernet power supply standard and is the mainstream implementation standard for PoE applications. The IEEE began to develop the standard in 1999. The first vendors to participate were 3Com, Intel, PowerDsine, Nortel, Mitel and National Semiconductor. However, the shortcomings of this standard have always restricted the expansion of the market. Until June 2003, the IEEE approved the 802.3af standard, which specifies power detection and control issues in remote systems and provides access to IP phones, security systems, and wireless LANs over Ethernet cables to routers, switches, and hubs. The way in which devices are powered by points is specified. The development of IEEE 802.3af includes the efforts of many power over Ethernet supplier experts, which also allows the standard to be tested in all aspects.

A typical Power over Ethernet system. Keep the Ethernet switch device in the wiring closet and power the twisted pair cable of the LAN with a power supply hub (Midspan HUB). At the end of the twisted pair, the power source is used to drive phones, wireless access points, cameras, and other devices. To avoid power outages, a UPS can be used.

2. IEEE 802.3atIEEE802.3at (25.5W) was born in response to the needs of high-power terminals. On the basis of 802.3af compatibility, it provides greater power supply requirements to meet new demands.

In order to comply with the IEEE 802.3af specification, PoE power consumption on powered devices (PDs) is limited to 12.95W, which is sufficient for traditional IP phones and webcams, but with dual-band access, video telephony, With the advent of high-power applications such as PTZ video surveillance systems, the 13W power supply clearly does not meet the demand, which limits the range of applications for POE power solution. To overcome PoE's power budget constraints and push it to new applications, IEEE has set up a new task force to explore ways to increase the power limits of the international power standard. The IEEE 802.3 Working Group created the PoEPlus research team in November 2004 to evaluate the technical and economic feasibility of IEEE802.3at implementation. The plan to establish an IEEE 802.3at investigation committee was approved in July 2005. The new standard, called Power-over-Ethernet Plus (PoEP) IEEE 802.3at, defines a device with a power requirement higher than 12.95W as Class 4 (this level is described in IEEE 802.3af, but is reserved for future use). Extend the power level to 25W or higher.

Next: USA Customer visited our Company for the second time