Main points of industrial switch selection in highway tunnel electromechanical monitoring system. All Ethernet ports of industrial switches can be used universally, that is, each port (including electrical and optical ports) can support the redundant ring mechanism. This function is particularly useful during field installation and subsequent maintenance. During the later maintenance, if the switch of the private protocol redundancy mechanism fails, the user must purchase the original manufacturer's equipment or wait for the original manufacturer to repair the equipment, which is extremely risky in an emergency; and the enhanced RSTP ring network redundancy protocol Ethernet terminal，The PoE switch for ethernet terminals is completely compatible with other industrial switches and even commercial switches, so it is very convenient to replace equipment, which greatly protects the interests of users.

In the field environment of the highway tunnel electromechanical monitoring system, reliability is undoubtedly the most important point. The tunnel electromechanical monitoring network can provide more reliable communication links by improving the hardware conditions of the network equipment and the network structure. From a hardware perspective, the factors that construction personnel need to consider are: the tolerance of the equipment hardware to the working environment, such as the operating temperature range,

Industrial Ethernet equipment is different from commercial Ethernet equipment, and generally adopts a compact design and rail mounting method that are more suitable for field cabinet installation. In order to avoid equipment damage caused by rotating parts failure, you should also choose a fanless hardware device. In the parameter description of the product, there should be a detailed description of the operating temperature range and electromagnetic compatibility, and a certificate of relevant access standards. In the field application environment of different industries, pay attention to the equipment selected should have the certification given by the corresponding industry organization.

2. After selecting reliable and stable hardware, the construction staff should also pay attention to the screening from the following two points: 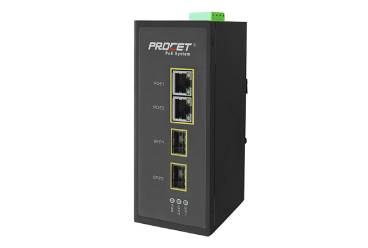 Under the private protocol redundancy mechanism, the looped ports of the same brand switch and other standard Ethernet ports cannot be used in common, so it is impossible to make the ports that do not participate in the loop support the redundancy mechanism; and the security of the enhanced RSTP ring network redundancy protocol Due to the openness of Ethernet, in the process of constructing the tunnel mechanical and electrical industrial ring network, the construction staff has to consider the factor of network security.

When selecting equipment, users should choose a switch that supports the 802.1Q VLAN function to facilitate the division of network functions. By dividing VLANs, construction personnel can isolate devices in the network based on functions to avoid artificial malicious damage or misoperation. At the same time, users can use the 802.1x function in the switch to authorize the devices that need to access the network to distinguish legitimate users from illegal users. The mainstream imported high-end switches currently support the following important network security mechanisms: multi-level user passwords; Radius authentication and authentication and access security; network intrusion detection system (IDS); support for SSH / SSL encryption, etc., which can fully guarantee the tunnel mechanical and electrical system Safe and reliable operation of industrial ring networks.

Next: Advantages of Poe Power Supply Products in Security Applications